From October 4th to 9th, 2020, we’ll ride 290 miles along some of California’s most breathtaking routes, exploring quaint towns and culinary oases, while enjoying the community of fun and friendly fellow cyclists.

For only $5, you can register for the 7th Annual California Dream Ride and look forward to one of the most gorgeous and rewarding bike tours you’ll ever experience.

Given the incredible range of highways, byways and bikeways connecting any conceivable start and finish cities, you might wonder exactly how we here at California Dream Ride HQ go about planning the route for our next 5-day ride.

There are two near-universal rules we follow. First, when the goal is to connect destinations along coastal California, always cycle “down” the coast, always toward Mexico.  You may ask: why not ride north? As someone famous sang, “The answer, my friend, is blowin’ in the wind.” We all have firsthand experience with the unfortunate bicycling fact that headwinds sap legs, turning flat roads into hills and hills into Mt. Everest-sized climbs. Seasons don't matter here in California; the prevailing breezes along the entire length of California’s coastline blow from north to south and from the sea to the mountains. As we map a new Dream Ride, we look for a way south.

The second near-universal rule is to respect the transverse mountain ranges. Most of California’s mountain ranges, including the Klamaths and Cascades near the Oregon border, the Coastal ranges north and south of San Francisco Bay, the Peninsular ranges of San Diego County, and the Sierra Nevada, run roughly north and south. Not so the mountains of Southern California. They run east to west. These transverse mountains are the product of recent (in the past 4 million years) geo-tectonic activity along the San Andreas Fault. Newness means that they are uneroded and generally steep, sometimes rising thousands of feet upward over a few miles of horizontal distance. Dreaming of the next Dream Ride, we aim for where the transverses aren’t.

In keeping with rule one, the 2020 California Dream Ride will roll west and south from Santa Barbara, taking advantage of tailwinds down the coast. Fortunately, Southern California offers several routes south that also avoid the transverse mountains per rule two. From all these choices, we opt for safe, scenic and memorable. Riders can expect to ride for miles along the Pacific Ocean, staying south of the mountains, and then between more mountains as we venture across Los Angeles and Orange counties on more than 100 miles of bike paths and bike lanes, past important landmarks and through historic neighborhoods.

Jon “The Navigator” Riddle, Director of Wayfinding, lives and rides all over Los Angeles County; the 2020 Dream Ride will again travel right through his backyard. He works closely with Ride Director Debbie Brubaker to develop the Dream Ride’s route, directions, and maps and will be on the road as a support rider, too.

Due to current circumstances, the first two Dream Ride Experiences for March and April have been postponed until further notice. While the ride in Santa Barbara Experience on May 16th is still on the calendar, we’ll make the decision to postpone this and any following rides as necessary.

We know there’s a long road ahead of us, and we hope that our Dream Ride events can provide something to look forward to as the dust settles. In the meantime, go ride your bike and get some fresh air (safely, of course)—you’ll feel like yourself again! Stay tuned to our blog and social media channels for important updates.

If you have a chance to ride on your own, here are the “Ride with GPS” route maps:

This story is about a road south, a tale that begins at the Rincon, an area of coastal California midway between Santa Barbara and Ventura. About a hundred years ago, just as the first bicycle craze was, unfortunately, giving way to automobiles, civic leaders in Santa Barbara were eager for a more direct route to and from the Los Angeles area. Back then, stagecoaches, mules and motor vehicles followed the Ventura River upstream and then climbed Casitas Pass into the Carpinteria and Santa Barbara area. A mix of private and State Highway Commission money built the Rincon Sea Level Road roughly parallel to a recently opened ocean-side rail line. In some places, wooden causeways of eucalyptus tree trunks and cross beams were built so that the Rincon could safely carry users around rock outcroppings and over high tides. Opened in 1913, this bit of road was probably the very first segment of what is now California State Route 1, though most of us know it as the Pacific Coast Highway (PCH).

California Dream Ride enters the story about 35 miles into Day 1 at a bluff-top lunch stop on the outskirts of Carpinteria. From there, riders continue south to join the Ralph Fertig Memorial Bike Path, which in all likelihood rests on the fossilized remains of the original Rincon plank roadway. If you’ve never ridden this bike path, you are in for a treat. Riders and walkers are separated from southbound traffic by a fully protected bikeway. Not too many years ago, cyclists were separated from high-speed traffic by not much more than a wish. Cyclists actually have the best views of the seaside landscape. South of Rincon Point, Bottlenose dolphins and surfers frequent the waves, so expect to see that wildlife, as well.

After passing through Ventura, Oxnard and Point Mugu, the PCH becomes a ribbon of asphalt sandwiched between pounding surf on one side, rugged mountains on the other. The Channel Islands to the west and the great arc of Santa Monica Bay to the south complete this panorama. World-class surfing destinations, sandy beaches, wetlands, and roadside eateries such as Neptune’s Net or Paradise Cove contribute to making Pacific Coast Highway one of the most scenic bicycle rides anywhere.

For a taste of cycling along the PCH, join CalBike and the Dream Ride staff on March 21st when we ride the Marvin Braude Bike Path between Marina del Rey and Redondo Beach in West Los Angeles. Not precisely PCH (that thoroughfare is a few blocks away), but the experience is darn close. For more information or to RSVP for the ride on March 21st, click here.

Jon “The Navigator” Riddle lives and rides all over Los Angeles County; the 2020 Dream Ride will again travel right through his backyard. He works closely with Ride Director Debbie Brubaker to develop the Dream Ride’s route, directions, and maps and will be on the road as a support rider, too.

Gazelles in the Golden State

At the end of September, we had the pleasure of escorting over fifty cyclists from Folsom to San Francisco on the incredibly scenic California Dream Ride. From the warm, wine-ready valleys of Napa and Sonoma to the sweeping, stunning vistas of the Pacific in Marin and San Francisco, this was a ride to remember.

This article is reposted from Gazelle Bikes. Gazelle joined the 2019 Dream Ride from Folsom to San Francisco.

No Drop--Cycling and Community Acupuncture

I just finished riding 280 miles on my bicycle with over 40 other people. It was an amazing experience and one of the most physically challenging things I have ever done. I loved it! One of the reasons I enjoy cycling, aside from the physical benefits and being outside, is how quickly it creates community.

When you ride with people, there is an ethos of looking out for one another’s safety--pointing out hazards in the roads or cars, sharing snacks if someone needs one, and even assisting in fixing flats or other minor repairs. In really good group rides, they are “no drop”--meaning everyone will wait for you at a point down the road--so it’s easy for new people get involved and ride along. It’s nice to know people will be there if you get behind. It both highlights and honors the differences between people. Biologically, I believe people do like being together in groups. It feels much safer than being on your own.

I wasn’t the youngest person on the ride or the oldest but was inspired by all the other riders. One who is living with active cancer--a recurrence after 22 years. Another, had multiple autoimmune issues and was able to do a lot of the riding despite intense chronic pain. I rode with 75 and 80 year olds who held their own well. And there were, of course, exceptional riders--fast and fit--who were still kind and supportive to everyone else. To say we had created our own community pretty quickly and certainly by the end of five days of riding together is an understatement.

A core/foundational structure of LBCA has always been to create community--to invite people into our healing space and see how they fit. Sometimes, it’s not a good one and people move on but more often than not, there is a great sense of belonging that animates what we do every day. In my mind, it is “no drop,” we are here waiting for you in whatever state you show up. We are here to assist and help.

Last month we celebrated our sixth year anniversary, as we move into our seventh year of practice. I am grateful for this inspiring community that gathers and disperses every day, hour by hour.

Many thanks to you who donated to support my ride for the California Bicycle Coalition. I raised $1,265.00 from your contributions!  They will be doing it again next year and this time the route will be from Santa Barbara to Oceanside. Perhaps, some of you will join us? If you’d like to see pictures of the full ride, you can click here. 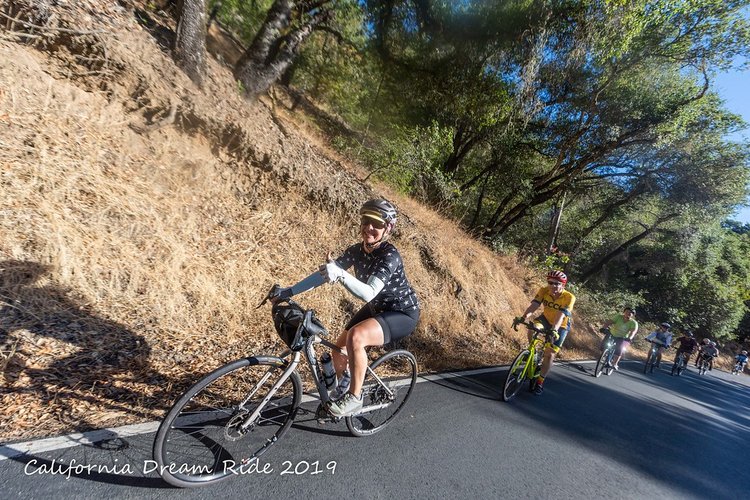 This article originally appeared on http://www.longbeachcommunityacupuncture.com

The 2018 Dream Ride has come and gone, but we’re still enjoying the post ride buzz. Didn’t snag a spot this year? Don’t fret: Registration today for the next Dream Ride!! We hope you can join us for another year of unforgettable bicycling.

This year, we were blessed with the best weather imaginable. Palm trees lined the horizon and the coastline followed us the entire route. We overnighted in six beautiful and unique cities: Santa Barbara, Santa Paula, Marina del Rey, Long Beach, San Clemente and San Diego. There were views you could never see from inside a car! Going into our fifth Dream Ride, we were excited to have a great group of new and repeat riders. Our riders were full of energy and enthusiasm. Some chose to form challenge groups – taking on higher altitudes and more distances. Others took their time enjoying the delicious snacks and breathtaking views at a leisurely pace. No matter the speed, we all felt like a family. Breathtaking views, semi-luxurious accommodations, and a truly worthwhile cause—this year we raised over $130,000 to support better bicycling and thriving communities across the Golden State. One of our Dream Riders, Lee Larsen, chronicled her journey on social media every day and raised an additional $1900 during the ride! Special thanks to our generous sponsor, Gazelle Bikes, for supplying e-bikes for riders to try out or to use for the entire ride. We had the company of Gabe and Paul from Gazelle to charge batteries, adjust seats, and change pedals. They had an assortment of bikes, from speedy commuters to stylish cruisers. We were truly spoiled! We hope you enjoyed this recap!